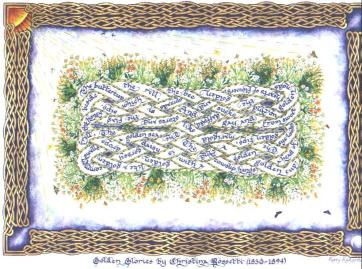 The buttercup is like a golden cup,
The marigold is like a golden frill,
The daisy with a golden eye looks up,
And golden spreads the flag beside the rill,
And gay and golden nods the daffodil,
The gorsey common swells a golden sea,
The cowslip hangs a head of golden tips,
And golden drops the honey which the bee sucks from sweet hearts of flowers,
And stores and sips.
This is the translation from the picture.

A new design which took Kerry 3 months to complete. Start at the top left hand corner and follow the poem round.
More Information...